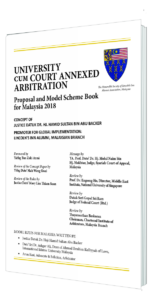 The concept, proposes that parties who are already before the court for litigation may choose to instead have their dispute referred to UCCA. At the moment, disputes in court are only referred to mediation. The court will facilitate the UCCA just as it does for court annexed mediation with a slight difference, in that under the UCCA there is a decision unlike in mediation, where if it fails the case will revert back to court for adjudication.

The concept proposes to allow academicians and university faculty members / alumni from their respective disciplines to be arbitrators in cases within their field of expertise. This means an academician in the faculty of medicine can preside as an arbitrator in medical negligence cases and likewise an academician in the faculty of environmental management can facilitate in disputes arising from waste management. The concept also proposes an alternative for the parties to the litigation to choose a judicial officer of their choice as their arbitrator. The court’s premises will be used for conduct of the arbitration.

Unlike the conventional arbitration based on pre-dispute agreement of the parties, the UCCA concept is a post-dispute arbitration agreement. The concept proposes to cap cost at a minimum and allows parties to agree in advance that they each bear their own respective cost. As for the arbitrator’s fee, the concept proposes that the university arbitrators undertake the work for a minimum fee. While in the judicial officer arbitration, a nominal fee will have to be paid to the court.

The concept also proposes a time-line for completion of the arbitration and accompanying rules for a swift and quick disposal of the matter. The courts have over the time become too rigid with a thick set of procedural and technical rules. However, in arbitration, the rules are what parties choose. There can be a fair amount of flexibility to facilitate focusing on dispensation of justice according to merits as opposed to technicalities. The arbitration will be conducted by a mix of adversarial and inquisitorial system or as parties may choose.

It will relieve courts of case load as generally there is no appeal from an arbitration award. It will save a lot of public cost in administration of justice. It will also create a skill-competition among judicial officers as parties / their counsels recognising and choosing a particular judicial officer is an accreditation of the merits of the officer. For the university faculty members / alumni, it will develop them further with hands on knowledge and experiences, as well as it may be a catalyst for them to preside at international arbitrations in conventional arbitration centres in the future.

Added benefits to the parties will include that the award will enforceable in about 160 countries, by virtue of legislations made in line with New York Convention 1958. The scheme addresses and resolves the two major setbacks of arbitration, namely high cost and delays.

The concept is a contribution to world peace and hence 24th October was selected to give it to the hands of the Dewan Rakyat Speaker at Parliament House.

If implemented, the UCCA concept will be a big relief to the parties to litigation. It would be a revolution in the administration of justice globally and a Nobel Prize winning concept.

Datuk Joy Appukuttan and Dinesh Nandrajog will be available during the presentation to discuss further on Janab’s 5 revised editions of the books.

Design by VTTECH IT SERVICES